Formation of Dynamic Recrystallization Zone and Characteristics of Shear Texture 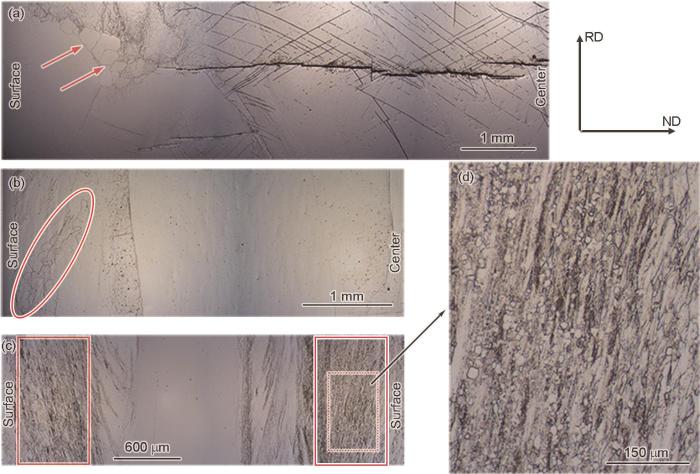 High-grade silicon steel hot-rolled sheets generally have textures and structures of gradient structures along the thickness direction. The subsurface layer is a shear-oriented fine equiaxed grain region, while the central layer is deformed by the α-line orientation (mainly rotated cubic orientation). Long grains [1,2]. In order to eliminate this huge difference in structure, it is necessary to select the appropriate temperature and time in the subsequent normalizing annealing process to make the grain size of the surface layer and the center layer uniform. However, even if the grain size is uniform, the texture cannot be uniform. The surface layer of the normalized plate is usually a weakened shear texture (the strength of the three shear textures of Goss, brass type and copper type will change), and the central layer It is close to {113}<361> texture [3]. To a certain extent, this texture gradient will be carried to the finished plate in the way of texture inheritance, that is, there is a fixed texture inheritance law in the process of cold rolling and final recrystallization annealing [3~7]. In addition, if normalizing annealing is improper, the growth of equiaxed grains on the surface and the recrystallization process of deformed elongated grains in the central layer will be asynchronous, which will aggravate the inhomogeneity of the grain size in the surface layer and the central layer.

Calvillo et al.[1] studied non-oriented silicon steel hot-rolled sheets and pointed out that the recrystallized grains on the surface are formed in the shear-oriented deformed matrix, and the recrystallized texture mainly includes copper-type texture ({112}<111>) and yellow Copper-type texture ({110}<112>). Matsuo et al. [8] hot-rolled oriented silicon steel ingots containing 3% Si (mass fraction) at a reduction of 90%, and observed that there is a microstructure gradient along the thickness direction, with fine grains on the surface and coarse grains on the subsurface. The central layer is deformed elongated grains; the Goss texture {110}<001> has a lower strength in the surface fine-grained region, and has the maximum strength in the subsurface layer (about 20%~25% thick under the surface layer). Previous studies [9,10] pointed out that Goss-oriented grains are mainly deformed and long strips; copper-oriented grains exist in the form of dynamic recrystallized grains; brass-oriented grains are located between the two, that is, fine equiaxed grains Coexist with elongated deformed grains. Although there have been many studies on the surface shear texture of silicon steel [11~17], they only focus on the favorable Goss texture strength changes, and seldom pay attention to the copper and brass textures. The existence of the magnetically harmful brass texture will have a significant impact on the magnetically favorable Goss texture[18]. In order to control the texture more quantitatively and accurately, it is necessary to further investigate the three shear textures and dynamic recrystallization The formation relationship of the crystal region.

The microstructure and texture of the hot-rolled sheet are the main factors affecting the magnetic properties of the final product. Although there are a large number of {100}-oriented columnar grains in the industrial continuous casting slab, the short-term high-temperature stay between the hot rough rolling and the hot finish rolling will cause static regeneration. Crystallization, equiaxing the grains and eliminating the columnar grain shear structure. Therefore, this work investigates the dynamic recrystallization zone and the evolution law of the three shear textures under shear conditions through hot rolling with different reductions in the laboratory, and clarifies the dynamic recrystallization law under shear stress. The shear texture of the rolled plate was compared to investigate the difference between the two.